Name In The News: Steve Colon 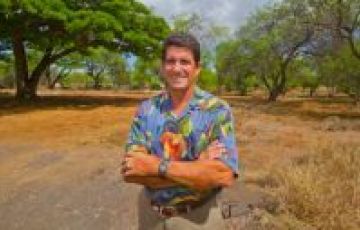 The Navy has been a part of Steve Colon's life, one way or another, for more than three decades.

Colon, Hawaii region president for Hunt Cos., left active duty in 1988 and retired from the reserves as a captain in 2006. In between those dates there was a year assignment at Pearl Harbor and, even after joining Hunt, one major task: the public-private redevelopment agreement for Ford Island.

So the former Barbers Point Naval Air Station -- now known as Kalaeloa -- is not unfamiliar turf for the 56-year-old executive now at the helm of that redevelopment as a 4,000-unit neighborhood. Oversight is ultimately the responsibility of the state Hawaii Community Development Authority (HCDA), but as the master developer, Hunt has been handling the nuts and bolts.

Colon lives with his wife, Carrie, and their Labradors in Kailua. If walking the dogs doesn't provide enough of a workout, occasionally competing in triathlons does.

But the rigors of overseeing the complex Kalaeloa master development takes up the lion's share of his time and energy. He shuttles to work between his office downtown and the one off Roosevelt Avenue, the main thoroughfare along the north boundary between Kalaeloa and Kapolei.

On one day last week, Colon accompanied the Star-Advertiser on a ride-along through Kalaeloa, slowly taking shape 15 years after the Navy base was shuttered. The enterprise has inched along for years, hindered largely by the complications and costs of connecting to the Hawaiian Electric Co. grid and retiring the old federal utilities systems for good.

But the pace is starting to pick up. There's funding for the power hookup at last, and a six-month renovation project to produce rental apartments in the former bachelor officers quarters (BOQ) is under way.

Rentals, especially affordable rentals, have been "a big chunk of our business for the last three years," he said, at the conclusion of the area tour.

"We are the largest owner of rental housing in the country. That's what we do, and most of that housing we own is affordable. It's a big part of what we're doing right now. So we are eagerly chasing affordable-housing type of opportunities."

QUESTION: These facilities, who owns them?

ANSWER: These are all buildings that we acquired as part of this public-private partnership, that we took over. And we've been gradually leasing them out. We've got 35 tenants now in different buildings.

This is an example of one of them. This was the former Navy medical clinic. And it was gutted, it was completely stripped of all copper. It was shut down for 10-plus years. We completely renovated it, cleaned up the parking lot, landscaping. We leased out a quarter of the building to the Army, and it's an Army medical clinic (the Warrior Ohana Medical Clinic).

We're in the process of making the rest of the building ready for other medical uses.

Q: Are you going to continue to hold the leases on these properties?

A: No, all of them are in the process of being converted to fee simple; all of them. The reason they were all under lease was because when we entered into the agreement with the Navy, the HCDA didn't have their zoning. So if we had taken it fee from the Navy, we would have been no zoning, which means we would have had to start from scratch with the city and state. So instead we're under lease.

Well, now all the zoning is in place. So now we can go ahead and convert everything to fee.

Q: You'll be selling it?

A: Well, we'll be master-developing it. We'll be selling some stuff, building on others. But the point is, we then at least would be the fee owner, whereas right now we're leasing them. ...

Q: What's the ETA on the rental project?

A: The rental project is six months. We've just started work on it.

Q: What's the challenge of a major rehab project like this? Are a lot of these military building sturdy enough that renovating is fairly simple?

A: No. The ones that are renovatable, we've renovated. We're pretty much at the end of the line. We've got the rental, the BOQ, but there are very few buildings left we can do anything with. ... Or maybe they're in an OK condition but we don't want them tied up for five to 10 years as a lease, when it would be more suitable for a master plan to do something else, a housing project, a rental apartment project or an industrial business park. We've got all these other uses identified in the master plan.

So the challenge is, you don't want to put too much into renovating this stuff, because, A, you're spending money that you have to get back; B, you have to give these guys at least five-year leases. And some of them want 10 years. So you're really locking that up, that you can't do your master plan. ...

I'd say, after that BOQ, we might still try and get somebody in here -- that building there, the brown one -- maybe a couple ones.

But if it's something we have to put a lot of money into? Remember, every one of these buildings were completely gutted. They (vandals) took everything. They took all the copper. They took plumbing. They took the fixtures. The thieves came in and completely stripped these. ....

It's definitely been a challenge. I'd say probably more of a challenge than we thought. We do feel like we're clearly on the right path to overcoming the challenges and moving forward. ...

Q: What were the unexpected challenges?

A: Infrastructure is probably the biggest challenge here. You have the water and wastewater system being privatized but hasn't been taken over yet. You have the electrical system, which is Navy.

Now, just now, there's finally going to be the HECO electrical trunk coming in. We are getting the electrical situation solved. That's going to be a huge boost. That was an HCDA initiative to get the Legislature to fund that.

Q: What was the funding commitment?

And this is a prime example when you say, "What are the challenges?" HCDA as the master redevelopment agency, we have to design to their rules. And their rules include having the streets just this wide. The City and County's rules call for much wider roads; and you have to get building permits from the City and County.

So if we were to build to the City and County, we would have to wipe out all this stuff, (indicating structures along the road), right? We'd have to take corners off buildings, we'd have to mow down rows of trees.

By working with the city and HCDA ... we've got the city to agree to allow us to have the road this wide. Resolving things like that has been difficult. They've been time-consuming.

The city said we needed to widen this, here (pointing to an area near a slope). So we said, "OK, if we do this the way you wanted, city, then there's no room over there to widen! Look! It's a pit!"

So because they didn't have this worked out, they said, "Tell you what, just do two lanes this side, and you're going to leave that."

Q: Is HCDA simplifying things here, or just functioning as another layer?

A: First off, most of the buildings that we've renovated, it was under a lease. So while we informed and collaborated and meet with HCDA, it didn't need HCDA's approval because it was under federal oversight.

This BOQ renovation, that's the first one where we're going under the HCDA development approval process. ...

Technically we could say because we're still under federal lease that we don't come under them. But the reality is, we're in the process of coming under fee-simple ownership. And we're fine with going through this HCDA development process.

Renovating that BOQ, that thing was an eyesore. It was closed down 15 years ago, heavily vandalized, graffiti. Think about it: For HCDA, that's a pretty good thing for us to come in and renovate that and turn it into workforce rental housing. Who could say no to that? Who's going to sit there and say, "No, that's a bad thing"?

Q: Are you anticipating any problems with that?

A: The structure's sound. We've extensively looked at it, tested it, done all the stuff we had to do. In our business you can always have surprises.

Q: That one was stripped by thieves, too?

A: Totally. Completely. It used to be 200 units where you had to share bathrooms ... so we're now turning that into 100 one-bedroom units.

Think about it: You don't have apartment complexes out here that have just one bedroom right? But think of all the families that have multigenerational living. You've got a couple, they're living with the auntie or with their parents because they don't have other suitable housing.

So this is going to create a unique kind of product for them. It's only one bedroom, so it's not going to appeal to families. ...

Q: The area where the old houses were demolished, that's where Kalaeloa Downtown will be, right? What is that going to be like?

A: Our master plan shows in the future that being like the town center, so to speak ... markets, little neighborhood grocery-anchored kind of centers.

Q: The downtown part will come up after that, then?

A: We think so. The master plan's flexible, so if people show us that there's a huge demand to do something there, then we can kind of shift around. We just think the natural path of the growth right now, since you've got Costco and you've got Kapolei right there and you've got all this happening right here, we just think the logical progression is to start out by coming down that way (west to east). ...

Q: These are for-sale homes?

A: We think it probably will be. Now, as master developer, what we're going to do is, we're going to bring in the infrastructure ... and then the home builders, they'll make that determination. My guess is that it would probably mostly be for-sale stuff. But it wouldn't be precluded -- I mean, we're seeing more and more rental stuff going in now.